While a lot of new things were created in October, from new characters to new settlement buildings, the most dominant vein running through last month’s game development progress was the creation of new abilities.

A myriad of spells and skills have been brought to life with animations, visual fx, and sound design, so we’re really stoked to show you them all. Before we get started, check out our Instagram, Twitter, or Reddit for daily updates on our pc game in development – now let’s get into it!

Designing Abilities For The Game

More than 20 new abilities have been brought to life this month with animations, visual FX, and sound. These are specifically for Talent abilities in the game, which are basically just a set of special spells and skills that a player can customise their character with.

The creation process for an ability starts in animation, where our Animator looks at the description for an ability and uses this to inform how the animation should look. For example, the Earthen Dwarf ability ‘Guided Fissure’ sends a rupture across five tiles, damaging all within that range. To show this, the Earthen Dwarf was made to stomp, and our Animator used the fact that this was a very physically-strong ability to really emphasise the force behind the action.

The character’s persona and lore is also taken into account when designing animations for abilities. Another example is the Parakaw Astromancer’s ability called ‘Meditation,’ which transforms the player’s remaining Movement stat into Mana. Parakaws are innate spellcasters who are very wise, calculated, and powerful. This is manifested in the ‘Meditation’ animation, where the Parakaw’s simple bow carries a lot of grace and power – especially when combined with its visual effects, which we’ll be showing you shortly.

Once an animation has been created, our Animator imports it into the engine where they then:

This is usually the point where any available VFX are added, but these are sometimes created after the animation so that they can correspond with the character’s movements.

One of our favourite parts about last month was seeing all of the badass effects that were getting churned out of our VFX and SFX departments. Our Visual FX artist uses UE4’s built-in system, Cascade, to create effects for abilities. Then, once these have been created, our Sound Artist will create sound effects for the available visuals. There are few programs they use to do this:

So, without further ado, here are some of the VFX and SFX that were created for abilities this month, specifically for 4 playable characters: the Watertarg Excursionist, Forest Druid, Human Knight, and Parakaw Astromancer.

Watertargs are an amphibious species, and one of the most ancient races alive in Erendorn. Excursionists are those who have left their over-water huts to explore the world. Given their affinity with water, Watertarg Excursionists possess a lot of aquatic-based powers, such as:

As the name suggests, this grants you additional Movement for 3 turns

Forest Druids are native to Erendorn’s High Forest, where they live in total synchronicity with nature. As such, their magic is rooted in Nature Damage, and utilises all the forces of the natural world. Forest Druids are also very curative individuals, possessing a lot of healing abilities, like:

Reduces the Resilience and Strength of enemies, as well as makes their spells doubly expensive

Creating Visuals & Sounds For The Knight

While Knights are but mere humans, they are physically very strong, proficient in combat, and capable of wielding a lot of damage-dealing abilities. These are usually coupled with and made more injurious by the use of heavy weaponry, from maces to two-handed swords.

As we mentioned earlier, Parakaw Astromancers are innate spellcasters that are attuned to astrological powers. Their magic is derived from the stars themselves and this, combined with the Parakaws’ high intelligence and wisdom, makes them very powerful characters.

Crystallic Preservation: When used, this encases you in a crystal and makes you immune to all forms of Damage. On its end, you’re granted some additional Health.

Arcanic Leech: This allows you to deal a good amount of Arcane Damage over 2 turns. You’ll also receive +1 Mana for every enemy you manage to injure.

Prayer of Rejuvenation: Use this to target a 3×3 tile radius and restore Health to all adventurers within that area.

Working On The UE4 Settlement

In the last month, our Environment Artists have been working tirelessly to finish up the settlement in UE4. This is the first settlement to grace Depths of Erendorn, though there will be many more added in the future.

So far, they’ve finished off the Guard House, with new additions like a longship-inspired fire pit, which players will be able to congregate around, as well as an intricately carved dragon head doorway, which adds some grandiosity to the Guard House architecture. When this structure was finished, we moved on to building up the rest of the settlement with new props and buildings:

There’s still a few bits we need to finish off before the settlement is done. This mainly includes completing the Inn and making some small tweaks here and there.

Here’s a look at the new fire pit and doorway for the Guard House, though these assets will be reused throughout other buildings:

Here’s a look at all the new buildings, watchtowers, and assets we’ve populated our settlement with:

Here’s a look at the Tavern, both inside and out:

Here’s a look at how the Inn is coming along:

A few new character classes were modelled for the game this month, including the Charged Spiderling as well as three classes of Human Guards.

You’ve probably heard a lot about this creature over the last month, but as a quick rejig a Charged Spiderling can only be summoned when you play as the Zentragal Illusionist and equip a special ability. On casting this spell, a Charged Spiderling will appear at your side and assist you in battle:

Our 3D Modeller followed their usual workflow when creating this creepy-crawly: the blockout and sculpt were done in ZBrush and the texture in Substance Painter. Our favourite part of bringing the Charged Spiderling to life was adding the blue emissive material, which we think even some of you arachnophobes are likely to enjoy!

The Human Guard series in Erendorn is made up of three hierarchical classes: the generic Guards, the Enforcers, and the Royal Guards. In the game, they’ll often be seen patrolling the gates of the Human Kingdom, but you may also encounter them as enemies.

Starting with the Royal Guard, our 3D Modeller sculpted, retopologised, and unwrapped these models this month, reusing clothing and armour pieces in order to streamline the process. Here’s how they’re looking so far:

Aside from reworking and rebalancing a ton of old and new abilities, our Game Programmers made a lot of important updates to the game last month. Here are some highlights:

Thanks for joining us for another devlog roundup! We’ll be back next month, so in the meantime, you can check out our weekly devlogs here 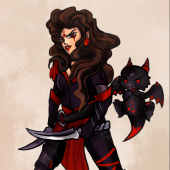